As the temperature gets warmer the LoopBack team is spending this summer releasing hot deliverables. In June we focused on various enhancements such as releasing version 2.0.0 of @loopback/build, replacing strong-docs, and improving @loopback/testlab. We also focused on authentication, inclusion of related models, and other improvements. You can see the June milestone for an overview of what we have worked on, and read on for more details.

In the past months, we have significantly evolved our build tooling. The last major change was the switch from tslint to eslint for linting. We decided it's time to clean up the code, remove unused parts and release a new major version.

See the release notes for more details and instructions on migrating your existing projects.

As part of these changes, we removed vulnerable dependencies and thus npm install in newly scaffolded projects reports zero vulnerabilities 🎉.

This change was a breaking change: as mentioned before, lb-apidocs is no longer available for use, as it was removed as part of this PR. For alternate solutions, you can use Microsoft's api-extractor and api-documenter.

On the brighter side, by removing strong-docs we also removed dependencies on 3rd party modules that have known security vulnerabilities but are no longer maintained.

We improved our testing helpers to support Jest testing framework.

We are also looking into ways to migrate our test suite from Mocha to Jest. Stay tuned for updates!

In PR#2977, we introduced some new documentation to the authentication package we've been updating these past few months. See Authentication for details.

We released the new adapter for passport-based strategies as @loopback/authentication-passport; now you can follow the guide in Use Passport-based Strategies to learn how to create and register a passport strategy and plug it into the authentication system.

A community user, @samarpanB, has contributed PR#2975 adding a new option includeRelations to the helper getJsonSchema. When the option is enabled, the helper adds navigational properties for inclusion of related models in the emitted model schema.

As part of our Inclusion of Related Models Epic, we updated our TodoList example to also include navigational properties. After the work done in PR#3171, now when getting a Todo with an inclusion filter, its included TodoList will be a part of the response and vice versa.

When you call GET todos/2, you get the following response:

And now when you call GET todos/2 with the filter {include: [{relation: 'todo-lists'}]}, you get the following response:

You can check out the new full example by calling lb4 example todo-list.

In PR#3199, we enabled added a partial option for JsonSchemaOptions. This addition allowed us to emit schema where all the model properties are optional. By doing this, this lets us to now do PATCH requests without having to include all required properties in the request body.

For example, before when trying to update a Todo from our Todo example, you'd have to include the title property in the request body:

But now even though title is still required, it is optional when doing a PATCH request. So now the following is a valid request body to pass to the following request:

All newly created projects generated through the CLI will allow partial updates through PATCH.

In PR#3202, we updated the GitHub issues template, so that when you open a new issue, you're taken to a page (see image below) where you can choose the type of issue to open. The options we offer are: bug report, feature request, question, and security vulnerability. With these new more specific templates, it will be easier for the team to go through and understand new issues. 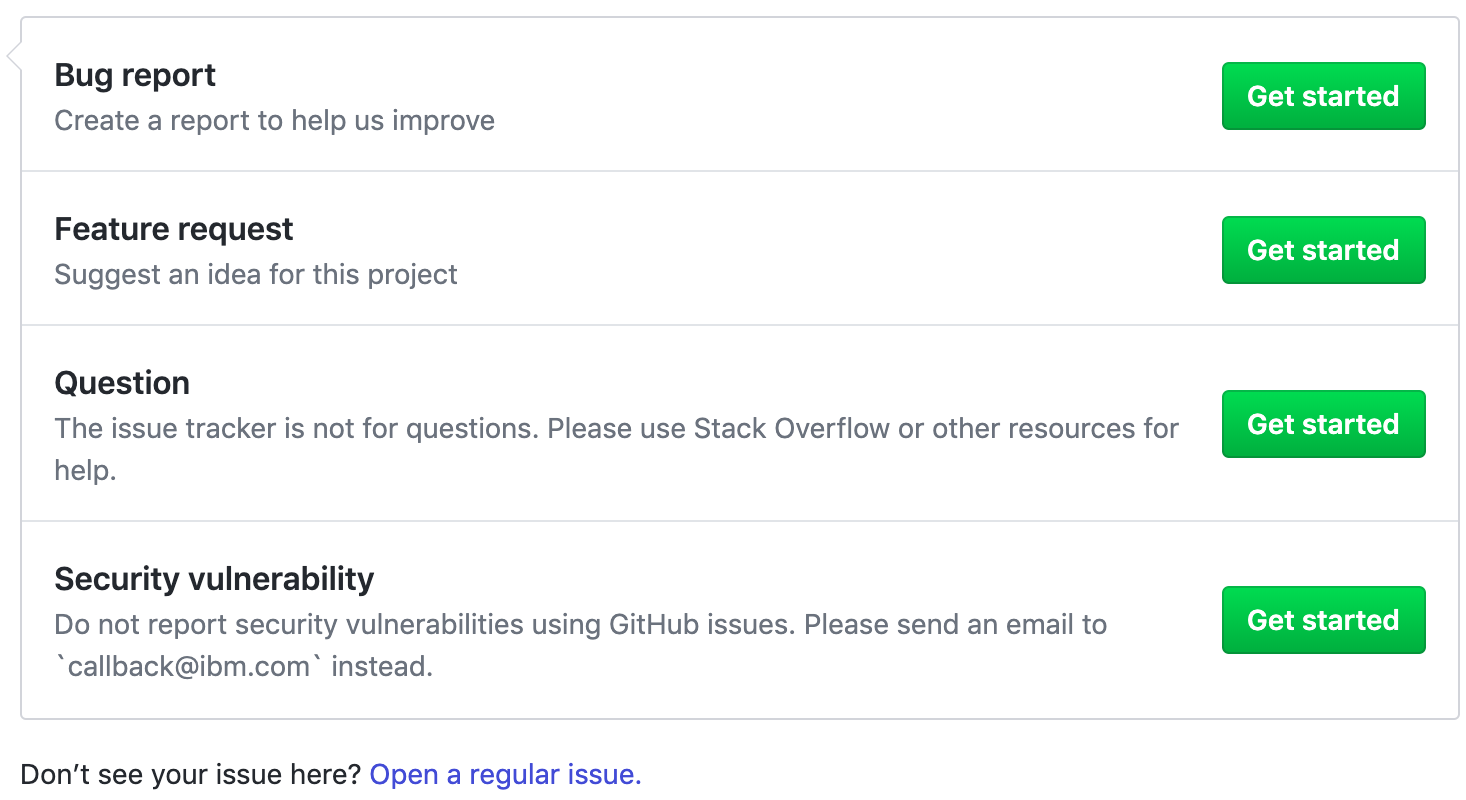 We also made some fixes to our lb4 discover command:

We have a new addition to our LoopBack team: Agnes (@agnes512 on GitHub) has joined the team as our intern for the next year. She has already contributed improvements to our documentation, our cloudant connector, our CLI, and more. We're happy to have her on our team and look forward to see what she accomplishes in the future.

We have upgraded our eslint-related infrastructure to eslint version 6 and added few more rules to the default eslint config to catch even more programming errors:

As you might be aware, the loopback.io website has a brand new look. We'd like to rebuild the "Who's using LoopBack" section and showcase our users and their use cases. If you would like to be a part of it, see the details in this GitHub issue.

If you're interested in what we're working on next, you can check out the July milestone.

LoopBack's future success depends on you. We appreciate your continuous support and engagement to make LoopBack even better and meaningful for your API creation experience. Please join us and help the project by: