A LoopBack application has its own life cycles at runtime. There are a few methods to control the transition of states of Application.

The initial state of application is created. There are two types of states expected:

Operations can only be called at a stable state. The logic of each operation should immediately set the state to a new one indicating work in process, for example, start() sets starting and stop() sets stopping. Calling a different operation in an in-process state will throw an error. If the same operation is in process, it awaits the operation to finish without performing any logic.

The state can transition as follows by operations including boot, start, and stop:

State transitions are illustrated in the diagram below: 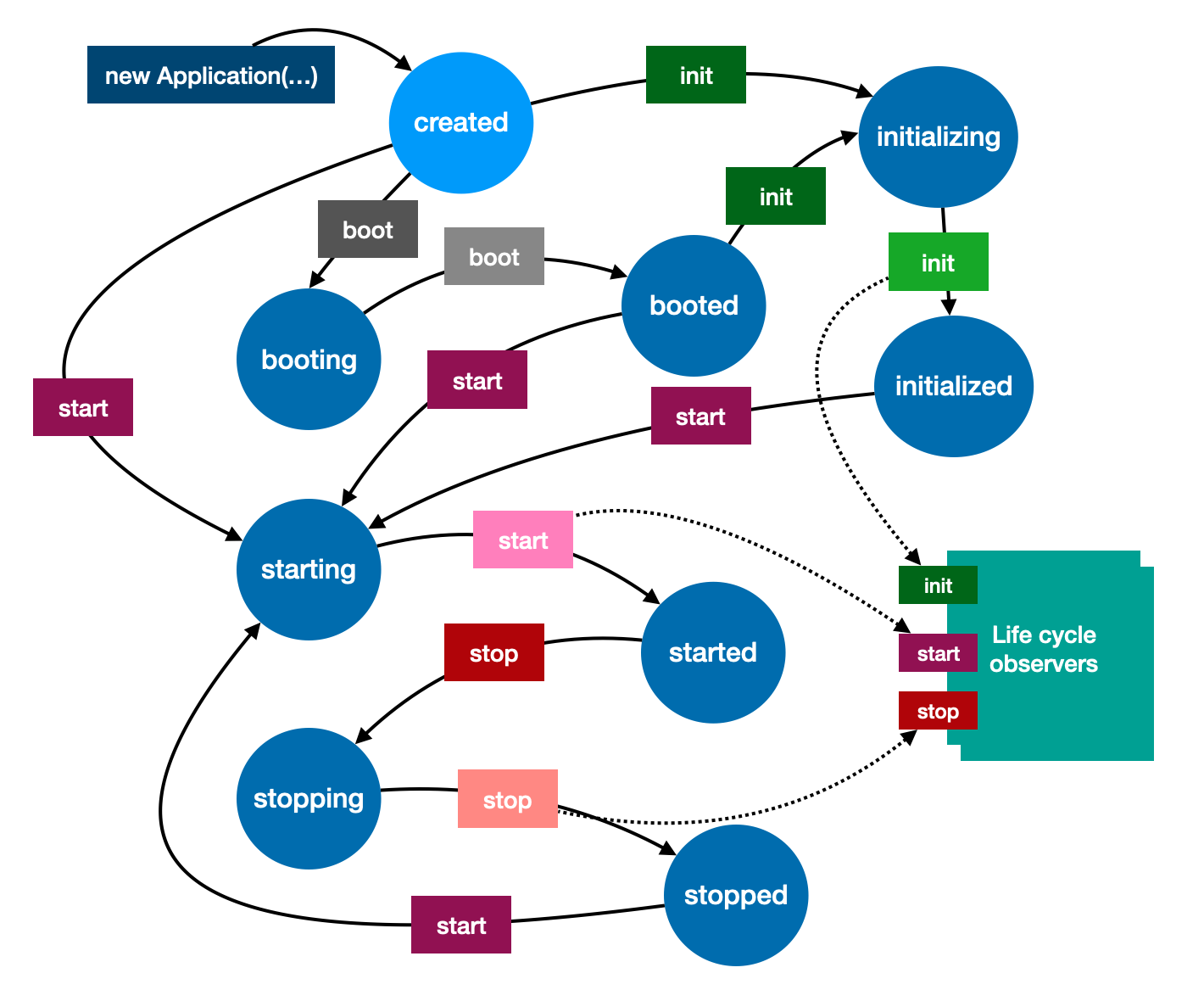 Each state transition emits a stateChanged event with data for the from and to states. For example:

Node.js will normally exit with a 0 status code when no more async operations are pending. But it’s typical that a LoopBack 4 application creates connections to backend resources and listens on network interfaces for incoming requests. In such cases, the process keeps alive unless it receives a signal to shutdown. For example, pressing Ctrl+C or using a kill command.

When the LoopBack 4 application is running inside a managed container, such as a Kubernetes Pod, there is a protocol between the container and the application process. The use case is supported by configuring the application with the shutdown option:

For example, the following application captures SIGINT to gracefully shutdown:

When the application is running inside a terminal, it can respond to Ctrl+C, which sends SIGINT to the process. The application calls stop first before it exits with the captured signal.

Participate in the application start/stop

It’s often desirable for various types of artifacts to participate in the life cycles and perform related processing upon start and stop. Good examples of such artifacts are:

Both start and stop methods are optional so that an observer can opt in certain events.

A life cycle observer can be registered by calling lifeCycleObserver() of the application. It binds the observer to the application context with a special tag - CoreTags.LIFE_CYCLE_OBSERVER.

Life cycle observers can be registered via a component too:

In some cases, it’s desirable to register a single function to be called at start or stop time.

For example, when writing integration-level tests, we can use app.onStop() to register a cleanup routine to be invoked whenever the application is shut down.

The Application finds all bindings tagged with CoreTags.LIFE_CYCLE_OBSERVER within the context chain and resolve them as observers to be notified.

There may be dependencies between life cycle observers and their order of processing for start and stop need to be coordinated. For example, we usually start a server to listen on incoming requests only after other parts of the application are ready to handle requests. The stop sequence is typically processed in the reverse order. To support such cases, we introduce two-dimension steps to control the order of life cycle actions.

First of all, we allow each of the life cycle observers to be tagged with a group. For example:

We can then configure the application to trigger observers group by group as configured by an array of groups in order such as ['datasource', 'server'].

The observer class can also be decorated with @injectable to provide binding metadata.

Or even simpler with @lifeCycleObserver:

The order of observers is controlled by a orderedGroups property of LifeCycleObserverRegistry, which receives its options including the orderedGroups from CoreBindings.LIFE_CYCLE_OBSERVER_OPTIONS.

Thus the initial orderedGroups can be set as follows:

Observers are sorted using orderedGroups as the relative order. If an observer is tagged with a group that is not defined in orderedGroups, it will come before any groups included in orderedGroups. Such custom groups are also sorted by their names alphabetically.

The sorted observer groups will be:

The execution order of observers within the same group is controlled by LifeCycleObserverOptions.parallel:

Each application can have custom life cycle observers to be dropped into src/observers folder as classes implementing LifeCycleObserver.

During application.boot(), such artifacts are discovered, loaded, and bound to the application context as life cycle observers. This is achieved by a built-in LifeCycleObserverBooter extension.

To make it easy for application developers to add custom life cycle observers, we introduce lb4 observer command as part the CLI.