LoopBack is an open-source Node.js framework built for API developers. Its primary goal is to help create APIs as microservices from existing services/databases and expose them as endpoints for client applications, such as web, mobile, and IoT. LoopBack connects the dots between accepting API requests and interacting with backend resources. By facilitating developers to implement API logic with out of box integration capabilities, LoopBack establishes itself as the API composition layer to differentiate from other frameworks, such as Express, Hapi, and Sails.

Up to version 3.x, LoopBack built on the popular Express framework. In retrospect, basing LoopBack on Express was the right decision: Standing on the shoulders of Express enabled LoopBack to focus on adding value for API creation experience without reinventing the wheel. LoopBack also has benefitted from the Express ecosystem, especially ready-to-use middleware modules from npm as well as valuable knowledge and support by the community.

With LoopBack, developers can create and expose APIs just like following a recipe. LoopBack introduces a set of core concepts that represent the key aspects of API implementation. To create APIs out of existing databases or services, developers can simply scaffold a LoopBack application, then add necessary JSON declarations and Node.js code to get their APIs up and running in a few minutes.

LoopBack uses Express routing and middleware as the plumbing to a request/response pipeline for API use cases, such as authentication, authorization, and routing. Beyond inbound HTTP processing, LoopBack provides integration facilities such as models, datasources, and connectors to allow API logic to interact with various backend systems, including but not limited to, databases, REST APIs, SOAP web services and gRPC microservices. The ability to glue inbound communication and outbound integration makes LoopBack a very powerful framework for API developers. The diagram below illustrates how LoopBack fits into a typical end-to-end API processing flow. 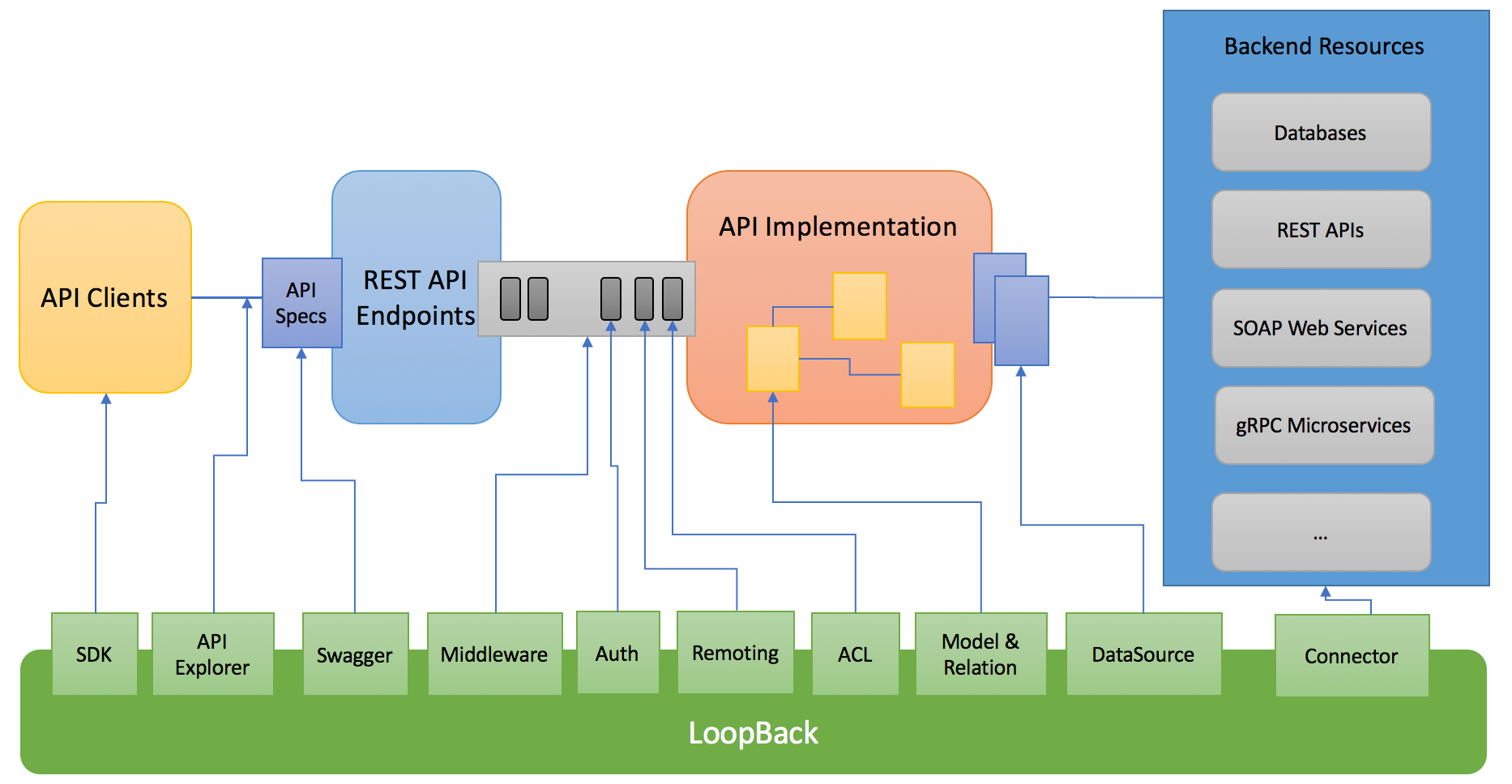 LoopBack has grown significantly in features and users with many years of development and multiple releases. LoopBack has been well-received by the developer community. As an indication, the community has developed many extensions. The core team has also learned a lot from what we have done as well as great feedback from the community.

Like many projects, LoopBack has started to experience growing pains, especially as:

Since the release of 3.x, the team has been brainstorming about how to sustain and advance LoopBack. We did a lot of homework, triaged existing GitHub issues, reached out to community members and downstream products, and evaluated relevant frameworks and technologies to answer to the following questions:

LoopBack has gained traction among a spectrum of users beyond Node.js application developers, including: 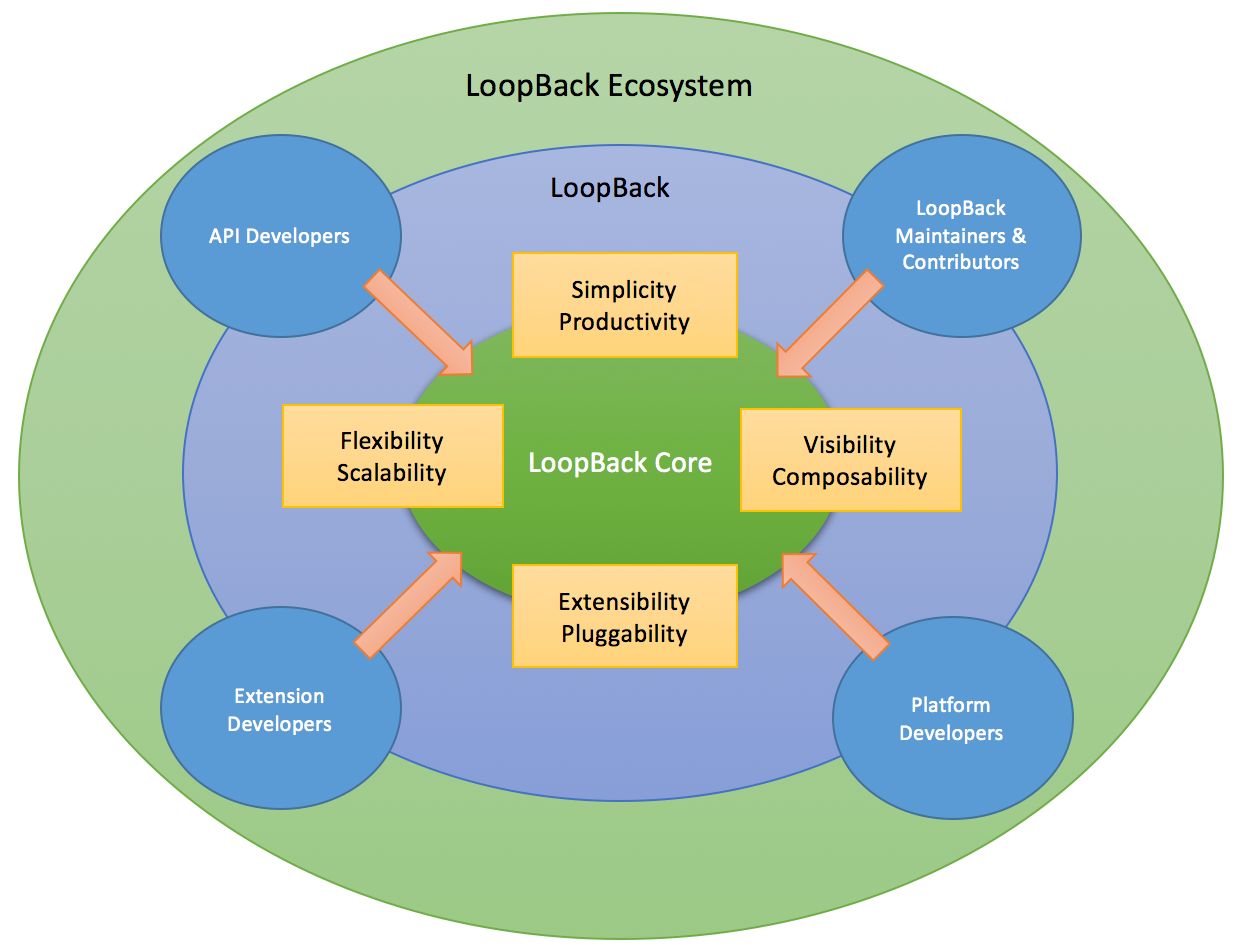 The core team decided to make a bold move and rebuild LoopBack to meet the needs of all the above groups. The decision led to the inception of LoopBack 4, a new generation of API creation platform. For more information, read the blog post Announcing LoopBack.next, the Next Step to Make LoopBack Effortlessly Extensible.

We decided not to take a “big-bang” approach to build LoopBack 4. Instead, we are doing it incrementally in multiple stages with smaller steps. This approach allows us to better engage the community from the beginning. We are following the principles below to pursue architectural simplicity and extensibility:

Here are the stages we are marching through toward the final version of LoopBack 4 as illustrated below.

The following diagram illustrates the high-level building blocks of LoopBack 4: 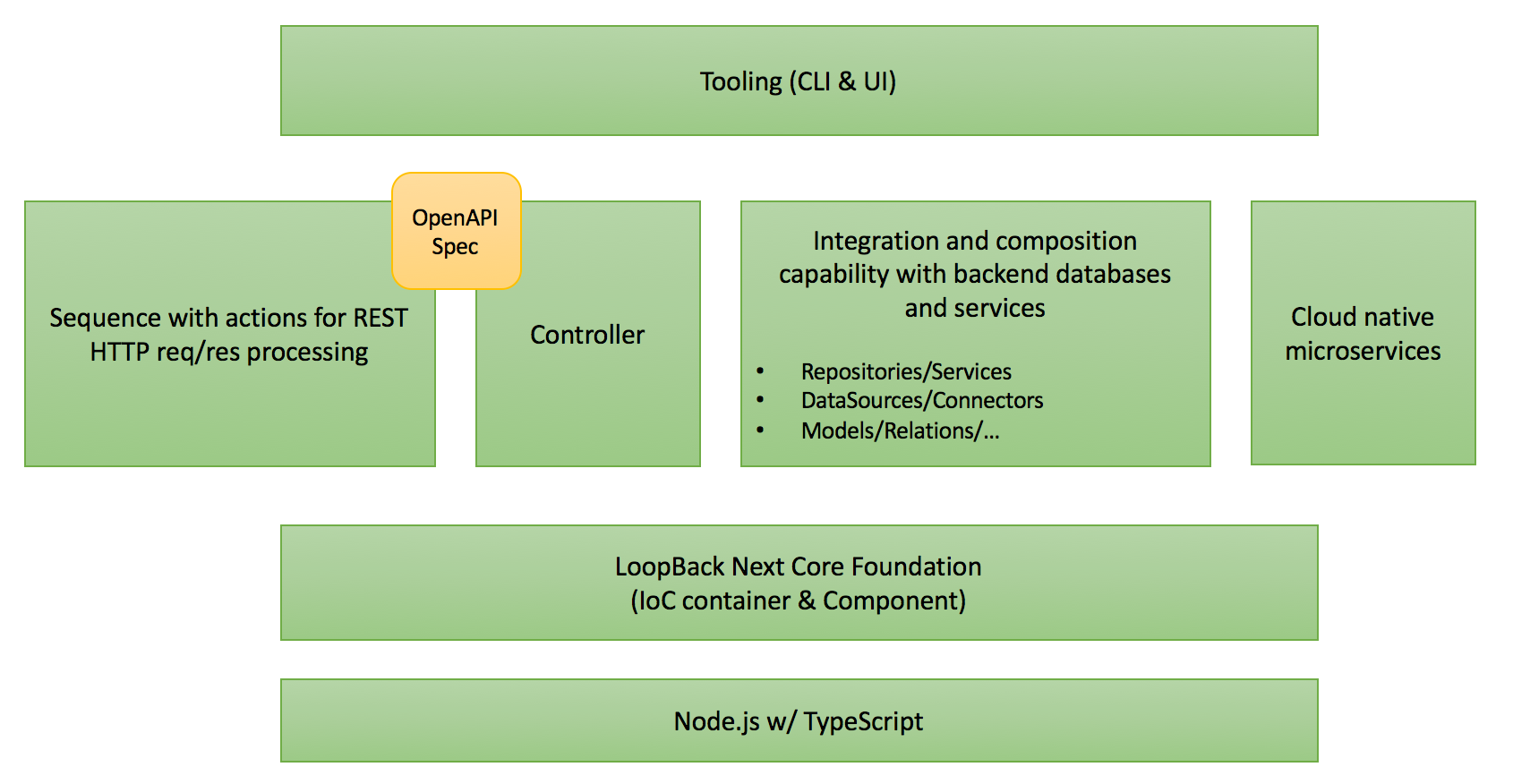 Please note there is a common layer below the different functional areas in the stack. Let’s examine the need to build a new core foundation for LoopBack 4.

LoopBack itself is already modular. For example, a typical LoopBack 3.x application’s dependency graph will have the following npm modules:

LoopBack manages various artifacts across different modules. The following are a list of built-in types of artifacts that LoopBack 3.x supports out of box:

Metadata for these artifacts form the knowledge base for LoopBack to glue all the pieces together and build capabilities to handle common API use cases.

How to represent the metadata and their relations is the key responsibility of the LoopBack core foundation. It needs to provide a consistent way to contribute and consume such building blocks.

Key ingredients for the core

The core foundation for LoopBack 4 is responsible for managing various artifacts independent of the nature of such artifacts.

Why Express behind the scenes?

LoopBack had always been built on Express so we can leverage the vast community and middleware in the Express ecosystem BUT it presented some challenges for LoopBack. With LoopBack 4 we considered moving away from Express (and even built the framework without Express) but eventually circled back to Express because of its vast ecosystem.

Some of the gaps between what Express offers and LoopBack’s needs are:

Circling back to Express with a twist

The main purpose of LoopBack is to make API creation easy, interacting with databases, services, etc., not middleware for CORS, static file serving, etc. We didn’t want to reinvent the wheel by writing new middleware for LoopBack 4.

The team explored leveraging Express or Koa (but only for their middleware support). The final decision was to use Express in a way that bridges the gap by addressing the gaps identified above as follows:

You can learn more details in our blog post on improving inbound http processing.

There are several key pillars to make extensibility a reality for LoopBack 4.

Rebuilding LoopBack experience on top of the new core

With the extensible foundation in place, we start to rebuild the LoopBack REST API experience by “eating your own dog food” with the following artifacts:

The features are provided by the following modules:

Before we go further, let’s try to build a ‘hello world’ application with LoopBack 4.

Learn from existing ones